Assembly and Installation of Gabions 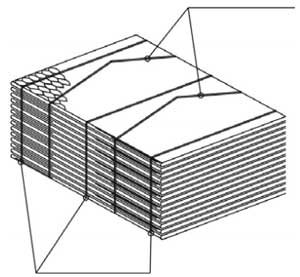 Gabions are supplied in bags, folded.
1.Raskroyte package with gabions.

2. Spread the gabion on a hard, flat surface and flatten the folds of all make sure that all parts of the gabion and smooth bends and no irregularities. 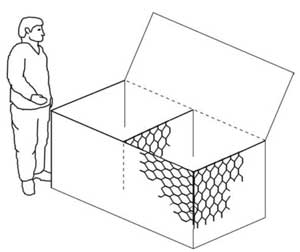 3. Bend the front, rear and side panels in a vertical position, forming a rectangular box. Connect the top corners of the box with a thick wire edges sticking out of the corners of each panel. Make sure that the upper parts of all four sides of the box are on the same level. 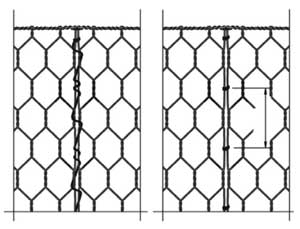 4. Begin to associate the top corners of panels for a bunch of wires, connecting the panels together coils, as shown in left picture. Ligation produced by alternating one loop and two loops through 100 mm. 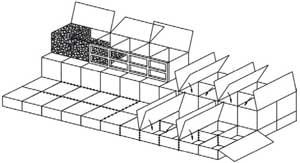 5. Generate a few empty gabions and set them into position. In the corners should drive rods and tighten them well. While the gabions are empty, they should make a bunch of them already filled with established and gabions. The surface of the land on which the rehydrating gabions, should be planned. To front edge gabion was flat, with its outer side is attached to frame. Between the gabions are bound, as shown in the figure. The second row of gabions shall be as follows: back to back, face to face.

6. To fill the gabions used stone-aggregate size of 125-200 mm (but not exceeding 250 mm). The minimum size of stone should not be less than the grid size. Intrusion of 5-7% smaller stone, which should be in the central part of the gabion. 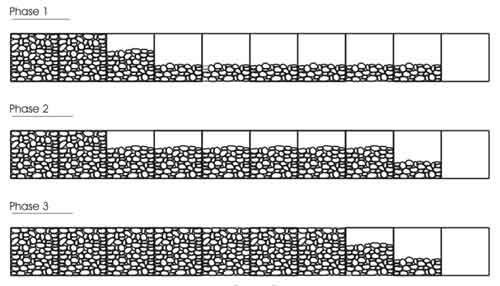 7. Gabions are filled manually or mechanically. Make sure that the stones fit tightly between them is the minimum number of voids. Last gabion left blank, to be able to bind to him the following set gabions. 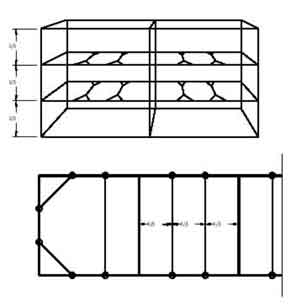 8. For once filled only 1/3 gabion. Then fix the gabion from within the horizontal band of the surface layer of the stone. Then fix the third gabion, and, finally, his last one-third to the top. Gabions filled with half-meter in two steps. Reno Mattress thickness 170, 230, 300 mm filled at once, without connecting clips. 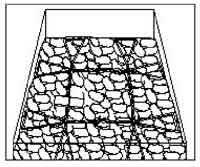 9. Gabion filled with stones at 2.5 cm - 5 cm above the top of lumps for precipitation of the stone. For these purposes, the most suitable material fines. When laying gabion mattresses (mattress Reno) in the downstream of dams and installation of simple aprons for protection against erosion sites are not active influence of the incident jet or strong flow between the upper lid gabion (Reno mattress), and his head to set additional binder clips.

10. Gabion lid must be pull tightly to the upper bound gabion and simultaneously link the wire. First you need to do temporary (provisional) to bind angles, to prevent any shift mesh around the perimeter of the top of the gabion. if rock-solid filler prevents cover a draw, then some of its number can be moved to central part of the gabion. 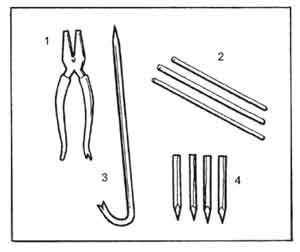 Tools
To install the gabions, the following tools:
Pliers, preferably with long lips
Mount or small scrap
A special tool to pull the cover and link gabion. 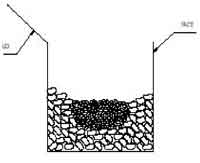 11. In some cases (for a relatively extended structures, which assumes a large load) for each installed gabion tension, together with a simple device to apply tension winch. The winch is securely anchored and secured to the sidewall of the empty gabion, the other side plate which is securely attached to an already worthwhile elements. Next gabion immediately.

Inquiry for Our Product

When you contact us, please provide your detail requirements. That will help us give you a valid quotation.